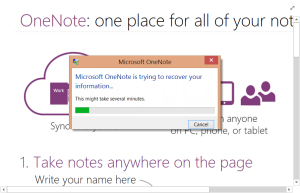 I hate it when a good app goes bad, and that’s just what happened to me a couple of times now with OneNote 2013.Â  If you’ve been using OneNote (or ON as I like to call it – gotta have that abbreviation) then you know what a great app it is.Â Â  A number of months ago OneNote would crash within ten seconds of starting up.Â  I found the resolution to it and moved on.

However, it just happened to me again so I thought I would jot a quick note; maybe it will help you if you run into the same problem.Â  There appears to be some issue with the handling of the OneNote cache that Microsoft is aware of.Â  I’m not aware of any actual fix for the problem yet, but there is a fairly simple workaround that isn’t painful.Â  What you are going to do is go to the working folder where OneNote keeps its cache, delete or rename the cache folder, then restart OneNote and let it rebuild the cache.Â  Here are the steps:

You can find another thread on the topic on the Microsoft Community.